Objects are created by declaring a class, and then using that class by defining (zero or more, where possible, of) its attributes - this process is known as instantiation. 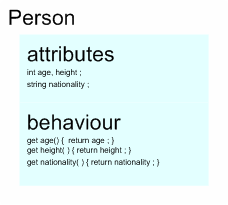 Each object is an instance of a class, that has it's own attributes (data) and behaviours (methods) that are called upon by the object's interface (i.e. its inputs / outputs), which strictly control (according to its own rules) how its data is sent and received.

We can create many objects of the "Person" class and each can have their own name. attributes and behaviours.

They are self contained entities, that have:

To identify an object, perhaps think:

Objects don't have to be tangible, physical or visible items - e.g. a bank account, time.

An object is also referred to as a concrete instance of a class.